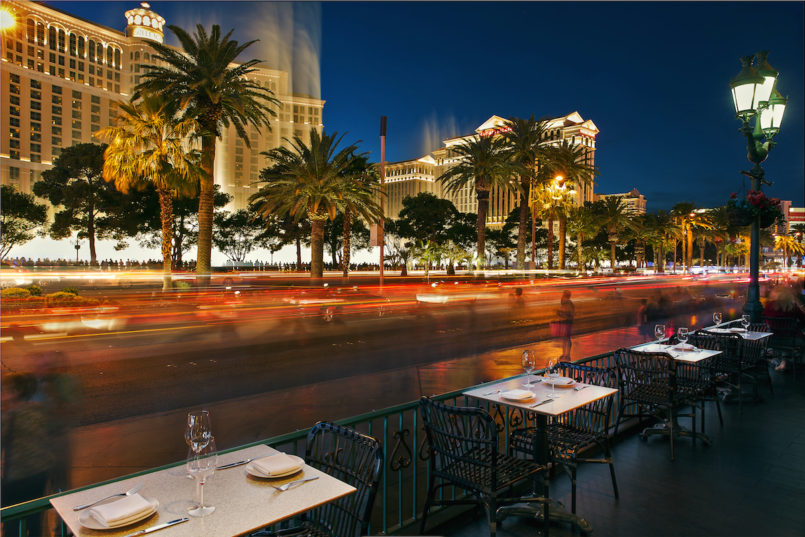 Savour the flavour with the Stripside Cafe & Bar

Bring back the Las Vegas good old days – like when Caesars Palace unlocked its doors way back in 1966 – with value for moneycombo meals at the resort’s Stripside Cafe & Bar. Combos include the Steakhouse Burger, shown, as well as brioche French toast, a cheesesteak or chicken Parmesan. Combos for breakfast, lunch and dinner are a mere $19.66 and include an entrée, choice of side and non-alcoholic beverage. We’ll drink to that!

Mamma Mia what a meal at Lupo!

The flavors of Italy’s Emilia-Romagna region are being displayed in the latest Friday’s Feast menu at Lupo at Mandalay Bay. Dishes like Tortellini en Brodo with spring peas and pearl onions, Tagliatelle with succulent Italian sausage and Bolognese start at $12. The five-dish menu will be offered every Friday during this month.

Andre’s Bistro & Bar, the new restaurant from Stacked Hospitality that honors chef Andre Rochat, one of the innovators of the restaurant scene in Las Vegas, features several typical plates synonymous with chef Rochat since his 1980 onset in Downtown Las Vegas.

Chick-fil-A was unveiled in two locations on the same day in Las Vegas. A second location opened at 460 N. Stephanie St. Word on the street states that both sites served 70,000 sandwiches within the first week. A third location opened at Sahara Avenue and I-15.

OMG! You must visit Cinnamon’s Restaurant

Finally, you could go to Giordano’s

After a long wait, a Chicago favorite deep dish pizza restaurant makes its entrance in Las Vegas. Giordano’s is now plating at the Grand Bazaar Shops. The dense and fabulously gooey deep dish is assembled in layers, with a rich crust as the basis, toppings and then creamy cheese. Giordano’s covers its pizza with a feathery film of dough to help embrace the toppings with a meaty and rich tomato sauce.

Granted, the main focus at T-Mobile Arena is usually on the high-level sports (boxing, basketball, and hockey are some of the favorites), and large-scale entertainment. But it really doesn’t hurt that there’s also an extensive network of cool restaurants like Shake Shack and Chronic Tacos to mention just a couple. And it’s in the core of the Strip, so you can absorb all the famed Las Vegas action later.

If like us you love a great and satisfying meal and want to reserve places at the hottest eateries then be sure to ask us. We know the best places to try out when you’re eating out in Vegas!

Be sure to contact us at 702 ENT, our pristine Concierge Service will gladly help you choose the best eating joints available in the city – whether you’re in the mood for some hearty grub or some self-indulgence type of dining – we’ve got all the connections!